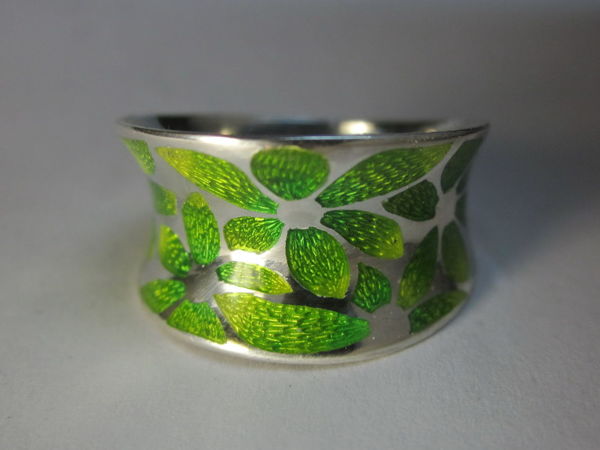 It's been a long time since I posted a tutorial and decided to show the process of making a ring which I finished today.

I started, as usual, with drawing the developed view of the ring in vectors in CorelDRAW. Printed it out, pasted on silver rolled 0.35 mm thick. This will be the top of the "sandwich", for the substrate made a strip 0.6 mm thick.

I drilled holes, started sawing. I was asked more than once how to cut, what are the nuances? I answer so. You need to cut from the center to the periphery, holding the saw vertically and periodically lubricating it with wax, but not the teeth, the sides of the saw. Through the paper incised with the outline of the ring, to later use it to sawdust. After cutting, I burn the paper, it just burns.

Then I put the sawed-out upper part on the substrate and solder them together. Thus we get recesses, which will then be superimposed enamel.

There are several ways to obtain recesses. The first I have already described. They can also be made by etching, stamping, drawing. I prefer "sandwich". To me it's easier and more convenient as I own the jig saw for 40 years (from when I was 10 years old).

Then I cut off the excess substrate with scissors, turn on the crossbar, store the joint and solder.

Now I begin to shape the ring with the edges raised. For this spherical ponselle, gradually increasing the diameter, from one side, then the other, as would put them in the ring.

At one stage, I broke the seam, I put the seal there and soldered it. When you increase the diameter of a dapping punch, as one side of the ring is weakened with sawn windows, the ring began to roll to the side – exactly how I needed!

Now saw round the general shape of the ring and saw cut process.

This seems to be possible to stop and start enameling, but given that the enamel will be transparent, you need to give a texture to the bottom of the recesses, it will look better. I took an engraving tool and picked it up like that... Why pick? Yes, because I have never been an engraver, so it can only be called so:) The engraving tool is very narrow 0.6 mm, it is problematic to photograph it, so I can only attach a picture for general understanding.

After much agony with the selection of the color palette of enamels and getting a satisfactory result on the probe, I started enameling. Applied with stretching 3 colors: dark green, green and yellow.

Putting a couple of layers with intermediate firing, cut the protruding enamel with diamond broach file with water. Then put some more, cut down again and terminally burned. However, this is not quite final...

The enamel is applied, cut, but the silver is scratched with a needle file. Grind it with an elastic band on the drill, do not be afraid, go right with the enamel, everything. Then thoroughly washed in an ultrasound bath, dry and burn again. Gray spots remained on silver but they can be removed both mechanically and chemically. Transparent enamels are not afraid of lemon, so I bleached it a little. Then I sanded and polished the whole ring.

Of course, I tried to do everything as efficiently as possible, but I myself estimate the quality with 8 points out of 10. I wouldn't say for what I had minused 2 points :) The artist is the strictest judge for himself, but in public I do not want to blame myself either :) Let it remain my little secret...