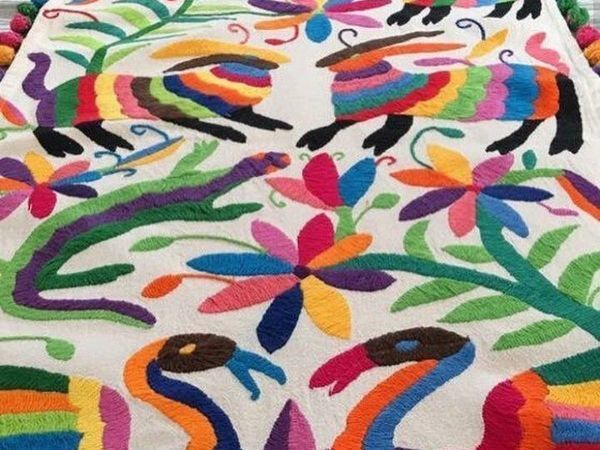 Tenango is a characteristic color embroidery on a plain canvas of the Otomi Indians who inhabit the Mexican state of Hidalgo. It is the hallmark of the entire country. The technology dates back to the 60s of the last century, when the region was hit by a terrible drought that destroyed a significant part of the crop. Caught in a deep economic crisis, residents began to look for alternative sources of income. It was decided to revive the craft traditions of the ancestors who were engaged in patterned hand weaving and embroidery.

Today, almost all the settlements of the Otomi Indians are engaged in tenango embroidery. Initially, tenango embroidery included only images of flowers, but this style turned out to be boring and did not find a response from the buyer. A little later, the case changed the fate of tenango, when one of the women decided to show a creative approach and fit animals, people and plants into the composition. Blankets with such embroidery quickly sold out! Now tenango stories are local stories related to holidays, rituals, agriculture, or scenes of everyday life. Often there are images of fantastic creatures.

Tenango embroidery is named after the municipality of Tenango de Doria, which includes the town of San Nicolas, where it was born and which it made famous. For embroidery, the "crow's feet" technique is used, which allows saving thread.
Initially, only bedspreads were made in the tenango style, but these days these embroideries are decorated with a variety of items: wall carpets, curtains, clothing, lampshades, furniture, bags, and more!

To create these works, artisans buy a bedspread, apply a drawing with figures on it, choose the colors of the threads, their combinations, and then engage in embroidery. As a rule, one of the most creative people in the community is engaged in creating sketches, who sells fantasies realized on paper to the women of his community for a nominal fee. The work is time-consuming. One bedspread can be embroidered for up to 3 months.