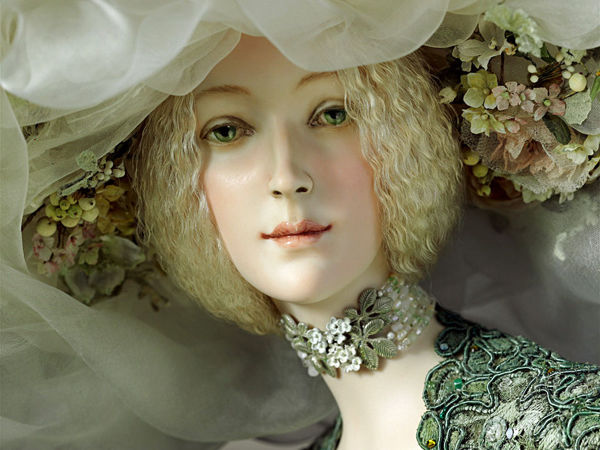 Having thrown a net into the bottomless depths of the Internet, I found an incredible pearl — porcelain dolls by Alexandra Koukinova. This woman is an Artist, starting with a capital letter, and her works, forgive for being pompous, are masterpieces! Her dolls are amazing, graceful, mysterious and unique. Each of them is endowed with its own temperament, character and style. They can be viewed endlessly, savoring facial expressions, plastics, clothing and accessories, made and painted by hand and with stunning taste.

Once upon a time there lived a girl in Moscow, her name was Sasha and she really wanted to dress up her dolls in beautiful dresses. Soviet shops did not provide a large selection of dresses not only for dolls, but also for girls and women, so there was only one solution — to sew and knit. Sasha was lucky. Firstly, there was a theatre workshop in her house, where you could get hold of patches of unprecedented beauty. Secondly, her mother was able to do needlework. So after a while happy dolls flaunted in the smart dresses thought up and made personally by the little dressmaker, and not less happy Sasha grew up and dreamed of career of the theatrical artist.

Said, done — Alexandra entered the faculty of scenography and theatre costume in the School-Studio of the Moscow Art Theatre, and while a student, she started working in the theatre to prepare costumes for perfomances. However, it was the end of 1988, there was excessive nervous tension and foreboding of great change in the air. "The most important art" marked its position with the Manifesto of "Little Faith". Theatres did not fall behind, filling the repertoire with social topics that did not require luxury costumes. No, this was not the job Sasha dreamed of! She wanted to create lush and airy dresses of witches, intricate and exquisite dresses of opera divas and chic costumes for historical performances, striking the authenticity of the details. And then, Yellow Earth Snake was replaced by a Yellow Dragon, and 1989 exploded with the words of Tsoi "Change, we want change". The time for change had come!

In 1989, Alexandra Koukinova worked in the theatre, getting 200 RUB for one performance, preparation for which lasted several months. She didn`t have any money for the living, it was not enough catastrophically. In those years, everyone earned money as they could, remembering the skills, acquired for life (my mother, for example, knitted hats-cockerels, and her friend sewed bed linen). Sasha also decided to combine business with pleasure, she set up a cooperation for sewing fabric dolls, inviting her friends from the theatre to help. Sasha drews sketches, women sew. But the first experience for various reasons was unsuccessful, the project "did not go". The story could have ended there, however, Alexandra was not in despair. Besides, she had nothing to lose.

Sasha fell in love with Russian costume while a student, when she came across a book about the traditions of Russian costume with great illustrations. She was literally shocked by the amazing patterns and intricate ornaments, richness of details and elegance of accessories, the finest and most skillful embroidery, inimitable lace... It is therefore not surprising that the first doll by Alexandra was dressed in the Russian national costume, which was made with precise observance of all the ethnographic details.

This idea was not just successful, but super promising! Perestroika attracted foreigners` attention to all Russian things. The Iron Curtain collapsed and many rushed to Moscow to see bears, walking on the Red Square, and to take home a souvenir from mysterious Russia. Shops, selling matryoshka dolls, bred like mushrooms after the rain, and Sasha's relative was brave enough to bring the first doll to one of them (at first, Alexandra did not have the spirit to do that). So miracle happened, a few days later the needlewoman became the happy owner of $30, which at that time was a very, very decent amount.

Inspired, Alexandra invited her friend, good at sewing and decided not to tempt fate, they simply cloned the "happy" example of dolls à La Russe. It was successful, and Sasha left the theatre, becoming a successful puppeteer.

In 1990, Alexandra Koukinova already had her own workshop, few workers and even a director for administration. The cooperative produced up to 150 magnificent dolls per month, earning decent money, and Alexandra became widely known in narrow circles :) and American entrepreneurs appeared on the horizon with a contract of 1000 author's dolls. Alexandra did not refuse... and took losses of $8,000 due to jumps of the currency. The business nearly collapsed, but Alexandra's father, who had a successful business by that time, did not only pay, but also financed a new idea of his daughter, which many considered very risky — porcelain dolls instead of fabric ones.

Alexandra never worked with porcelain and had to learn secrets of craftsmanship from personal experience, inventing, so to speak, a bicycle. The first porcelain (or rather faience) doll, made in the workshop of Alexandra in 1991, was, in her words, "terribly ridiculous and disproportioned." However, step by step, the quality grew, professional sculptors, cutters, embroiderers, lace makers joint her. Sasha drew detailed sketches, her team brought them to life.

The dolls were so good that American partners invested in promotion and advertising of the workshop $250 000, and the name of Alexandra Koukinova became famous among American collectors. However, the cooperation was short-lived, partners had to leave, and they behaved incorrectly, making an unreasonable claim to the company of Alexandra. But they failed, Alexandra by this time had become an experienced businesswoman and not only won the court, but also re-won the American and then the European markets, releasing a series of stunning dolls.

Today, dolls by Alexandra Koukinova cost from $10 to $10,000, and that price is justified, because the dolls are all "real" — dresses, shoes, jewellery, handbags, umbrellas, and they are produced in limited edition — from 3 to 250 pieces. Alexandra herself is rightfully called an outstanding puppeteer and is a member of the Moscow Union of Artists and the Creative Union of Artists of Russia.