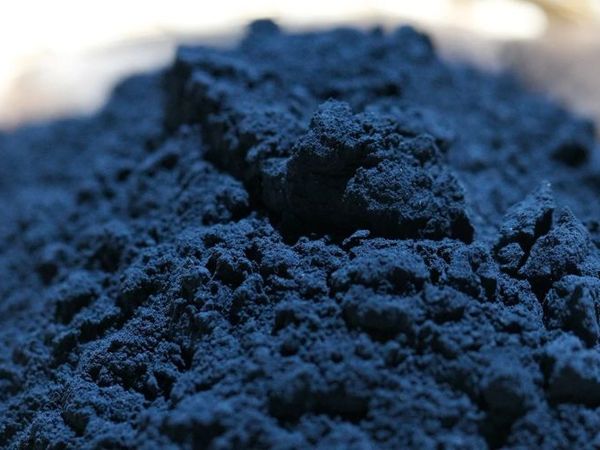 Indigo is one of the oldest colors. Its age is completely indecent, scientists date the first mention of Indigo to 3 millennium BC.

The dye was extracted from the leaves of indigofera, an Indian bean plant. Actually, that is why it got its name — Indigo — Indian. In the valley of the Indus the paint was called "Nile", which in the local dialect meant "dark blue". By the way, another name for Indigo is ultramarine. Guess what it means? Right, overseas.

Together with silk, camphor and spices, Indigo dye was in great demand among Europeans. This dye is very appreciated because of juicy color and fade-proofness. Try to imagine the logistics of the process — expedition equipment, months or even years of travel, extra costs — it was reflected on the cost of the dye. Therefore, only very wealthy, noble citizens could afford things painted with Indigo.

I must say that before the British and Dutch Indigomania — wholesale supply of Indigo dye to Europe, the medieval doctors and artists were already familiar it. Indigo was added to give color to the mixtures, and also mixed into frescoes solutions to preserve the brightness.

So, that is how the opposition between beans (indigo) and cabbage (woad) began.

Woad, being a weed, had a huge advantage — it spread with the speed of the wind and grew everywhere.
The woad leaves were used to dye wool in blue and green. In Russia, according to Vladimir Dal, "Woad was used to replace the cube paint, Indigo". Otherwise it was called hydrocyanic grass, krutik or usma.

But let's come back to the great confrontation between beans and cabbage!

In 16 and 17 centuries, a huge number of small farms were engaged in cultivation and processing of woad. Entire cities, such as Erfurt and Amiens, were industrial centers of woad cultivation. Lobbying the interests of traders from the East, meant to reduce government revenue from "small business" and almost ruin it.

In 1609, the French government issued a decree that anyone who preferred Indigo to woad would be sentenced to death.

In Germany, dyers signed a special document annually, pledging not to use the "devil's dye".

In England, Indigo was recognized as a poison. And this ban was in effect until 1660.

However, one thing made the situation complicated — it was impossible to recognize the dye in a finished good — Indigo or woad. Woad began to lose grounds.

Why had woad been replaced by Indigo despite the prohibitions?

Firstly, Indigo had already been brought in powder, and woad had to be dried in a damp and rainy English climate.

Thirdly, laundresses began to use a pinch of blue to wash white things, giving them, as they would now say in advertising, a glow of freshness.

At the end of 17 century, Indigo replaced woad plants.

Interesting facts:
1. In addition, Indigo as fabric dye was also used for the production of basma — hair dye. Amazing, right?

2. Isaac Newton identified Indigo as one of the rainbow colors. He placed it instead of purple.

4. Indigo-dye, which is used to paint denim — nim fabric or well-known denim fabric.