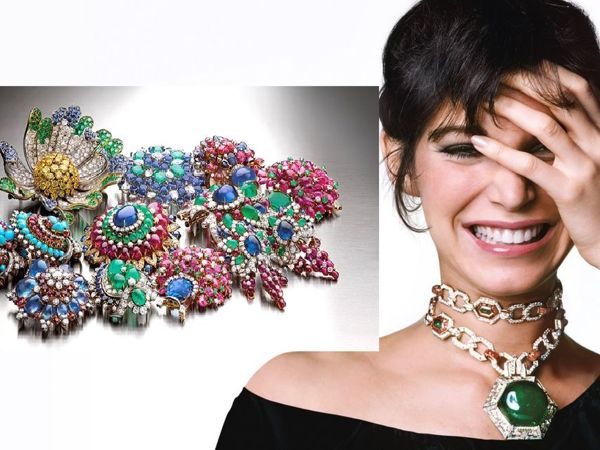 Recently I have visited the exhibition "BVLGARI. Tribute to Femininity. Magnificent Roman Jewels". It was an esthetic pleasure.

Many people wanted to make photos and shoot videos at the stand with Elizabeth Taylor`s jewellery. You may see the video of this stand below.

The emerald necklace BVLGARI, which became a part of the headset, presented to Elizabeth by Barton in memory "Cleopatra". In 1967, Taylor came in this necklace to receive an Oscar for the film "Who's Afraid of Virginia Woolf?".
There are several of her jewels on the stand, including "Cleopatra Mirror", created by BVLGARI for the film "Cleopatra". A unique thing, which later became a unique piece of Taylor`s collection.

The first 2 top pictures are photos of the first jewellery by the company. Made of silver. Bulgari was founded in 1884.

In addition, the company produced/produces all kinds of accessories apart from jewellery: handbags, flasks, ladies haberdashery and so on.

The history of the brand BVLGARI is inextricably linked with associated with the names of such legendary women as Anna Magnani, Elizabeth Taylor, Audrey Hepburn, Ingrid Bergman, Gina Lollobrigida, Monica Vitti, Sophia Loren.

I really liked the landscape brooch. It is Japan, the view of Fuji. Pay attention to small details, carefully dressing of stones. The brooch with volume elements on the background of mother-of-pearl and numerous diamonds.

In another chambers, one can follow the trends, innovations and developing of art style in BVLGARI jewellery. History of jewellery creation for customers.

The brilliance of precious stones is fascinating! Everything is done with great skill.

Many jewels are famous at the exhibition. Verushka wearing a sautoir with an obscenely large emerald, Vogue, 1970.

As the halls are small, I could hear what other people talked about. It was interesting to observe people's reactions.
The women groaned, gasped, sighed, expressed admiration, uttered the abrupt phrases and words.

Men divided into 2 groups. The first reacted as women, while the second asked the companions silly questions like "Well, where can you wear it?", or did even weirder insulting conclusions "It wouldn`t suit you".

The last brooch "stole" my heart. The flower is different from the General overall collection of jewellery. Other jewels are colorful, while this one has a calm delicate palette. The most skillful work and unusual decision of stones dressing.