Kuindzhi Painting Stolen from the Tretyakov Gallery. Most Ridiculous Stories of Stealing Paintings 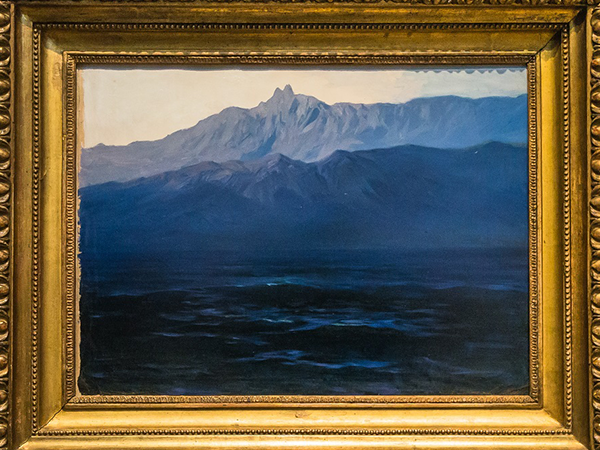 On 27 January, an audacious crime was committed: the painting "Ai-Petri. Crimea" by Arkhip Kuindzhi went missing from the State Tretyakov Gallery. This is a painting from the collection of the Russian Museum, which was brought to Moscow for the artist's exhibition. The composure of thiefs confused visitors: an unknown man just went to the painting and took it off the wall. The exhibit was not connected to the alarm system, so the audience, thinking that it was an employee of the gallery, did not interfere with him. The canvas of this painting is not big, only 29 by 53 centimeters, so, taking it out of the frame, it was easy to take out of the Museum.

Fortunately, the next day, the masterpiece was found in the suburbs of Moscow. However, despite the fact that the exhibition will continue until February 17, "Ai-Petri" will not be there — this was the decision of the Russian Museum after the accident. Though this is not a reason to miss wonderful exhibition, which has about 200 works of the artist :)

But not all stories of famous paintings disappearance have a happy ending.

For example, the thief of "The Dove with Green Peas" by Pablo Picasso, panicked and threw the picture in trash — and it remains lost since 2011.

In 2012, a great robbery was in Museum Rotterdam. Among the most famous missing items were "Reading Girl in White and Yellow" by Henri Matisse, "Waterloo Bridge, London" by and "Hungerford Bridge, London" by Claude Monet, "Girl in front of Open Window" by Paul Gauguin and "Harlequin Head" by Picasso. For a long time they has been considered lost, as the mother of the suspect said that she had burned them in her own furnace. Recently, however, "Harlequin Head" was found in Romania.

In 1934, "Just Judges", a part of the 12-panel altar paintings, by Jan van Eyck was stolen in Belgium. The thief left a note that marked the beginning of his seven-month correspondence with the authorities, but unfortunately, the painting has not been found yet.

The theft of "Madonna of Yarnwinder" by Leonardo da Vinci is similar to what happened to the painting of Kuindzhi.
"Don't worry, we're the police. This is just training!" the thiefs told the surprised tourists. Fortunately, this story also has a happy ending - the picture was found and is now exhibited in the National Museum of Scotland.

"The Scream" by Edvard Munch took over many people`s minds and has been an object of theft several times, but each time the authorities were able to get it back.

Even "Mona Lisa" was once stolen — the thief left with it under his coat. He did it because of patriotic reasons: he wanted the painting to be exhibited in the artist's homeland, in Italy. Partially the patriot managed to fulfilled his plan, he had had "Mona Lisa" at home for 2 years, and was exhibited in many Italian cities — but, in the end, it came back to Louvre.

All these stories reminded me of the book and the movie "If Tomorrow Comes" with a complex scheme of robbery, when the original painting was covered with two layers and presented as a copy.