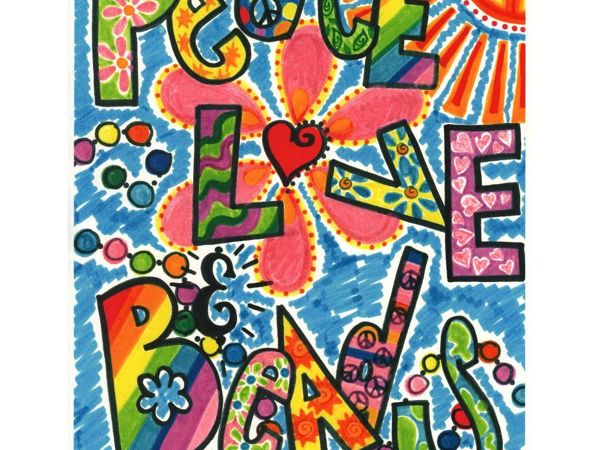 What's the first thing that comes to mind when we talk about hippies? Long hair, long music festivals and, of course, long, long strings of beads. The hippies called them "love beads". This term was firmly established in English in 1965.

Perhaps if we talk about the vast counterculture layer of those years, the beads will sink in it as a minor accessory. But if you try to find a visual symbol of the 60's, then most likely it will be the beads.

Beads of love are long, thin colored threads with beads and seed beads (friendship bracelets), which firmly entered the everyday life of Americans and Europeans with the generation of "flower children". They are usually consisted of hundreds, if not thousands, of tiny beads wrapped many times around the neck, waist, ankles, wrists... Sometimes they are up to three meters in length! Very often people made (and still make) curtains of such beads.

The time of the hippies is the era of freedom. A generation, loudly declaring the protest to the stiff 50s grew up. Starched collars and button-down shirts were replaced with a long skirt, a peasant blouse, ripped jeans, homemade ties and other "speaking" subjects of the era.

An integral part of the wardrobe of the hippies were handicrafts made of natural materials — primarily of hemp. Many elements of clothes hark back to the traditional design of India, Nepal, Morocco, Central America. The hippies largely copied Indian jewelry.

Beads can be of any kind — ceramic, wood, glass, metal, plastic... But real love beads were made of seeds and nuts: beans, acorns, kernels of corn. It was very popular to plant so-called "tears of Job". It is believed that its seeds — perfect beads — are created by nature itself. According to the legend, it grows only where a tear fell on earth.

The other type of hippie beads are mosaic, or Guelmim. Guelmim is a city in southern Morocco. The hippies discovered colorful African beads at local markets and used to buy tons of them.

The funny thing is that these glass tubes were not actually produced in Africa, but in Venice. How did they appear in Morocco? They were brought there by the Europeans to change different commodities including live goods. Another name for these beads is — "slave beads". They were widely used in slave trade. When the hippies learned this historical fact, the majority refused to buy Moroccan beads. After all, the most important value for them was freedom, and they couldn't wear a symbol of human trafficking.

It was probably the only taboo in relation to beads. They used everything to make love beads. Patterns, color, length, nothing was regulated. The only rule was the complete lack of rules when it came to expressing themselves.

Why did the hippies wear them

Beads of love were not only for expressing. They served as a symbol of love, peace and good will. The beads were a kind of political and social statement: love, not war.

In the 60s and 70s beads as well served as a great gift and an occasion to show a good attitude. One old school teacher — a hippie with experience — told me what his students gave to him (he taught in elementary school). Every student made a bead for the birthday of this long-haired, bearded teacher and then all together they strung the beads on a string and presented to the teacher.

Why do people still wear them

Although the hippie era is long over, love beads have never disappeared. In the 90s, they revived again, and Chicago Tribune wrote that homemade beads are a new way for today's youth to express themselves. Hmm, sounds familiar, isn't it?

Beads of love are also a perfect accessory in boho style which has prevailed in the fashion world since 2012 and is the successor to the hippie style. "Boho rather becomes a state of mind than just a look or a fashionable trend that will eventually disappear," wrote a contemporary historian of fashion.

Sounds strange, but the hippies probably never thought that their way of thinking, way of life and attitude to love would become something more than just a few lines in a history textbook. And they certainly never dreamed that their simple beads would ever be mass-produced and sold.