Five-o-Clock or Something about English Porcelain. Part 1 — Royal Albert 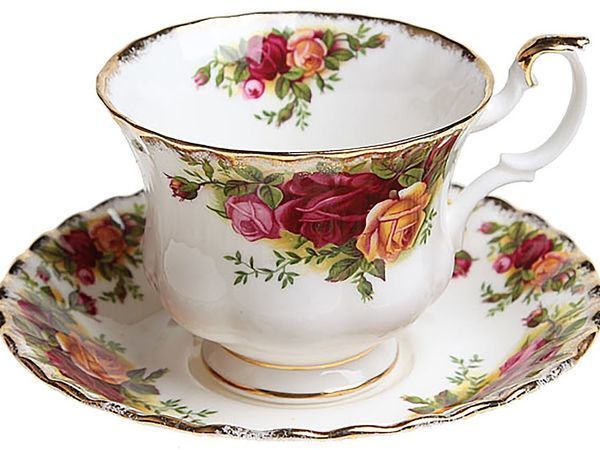 The British are very sensitive to their own traditions. Even those who are not able to personally visit Foggy Albion, heard about the red double-decker buses and telephone booths, which are considered to be the "visiting cards" of London, famous for its fog which covers the city like a thick veil, you can't see anything at arm's length, they also heard about the unchanging tradition of drinking tea at five o'clock in the afternoon. My beloved Lewis Carroll, with his usual originality, elegance and a truly British humour, immortalized the British five-o-clock in the adventures of Alice. Remember that mad tea party? The time was offended by the heroes of the fairy tale and froze on the number "5". Like true Englishmen, they were unable to break the tradition, and they were stuck at the table — their lives have become a never-ending tea party, they were simply changing the cups all the time! And as you know, a real Englishman is drinking real English tea only from real English porcelain!

***By the way, English porcelain is characterized by a special firing process. The saucer is completely covered with a glaze. This treatment gives it a special strength and makes it possible to safely put cups and plates on top of each other — no scratches, no damage to painting or gilding. So your favorite tea set always looks like a new one no matter how old it is! ***

So, let's get acquainted, the major brands of British porcelain:

Luxury classic ivory and white hard porcelain in a true English style. Different floral ornaments, noble lines. The sophistication of the antique is achieved by applying a 24-karat gold on the edges of the products.

Albert brand was founded in 1896 by Thomas Wild and in 1901 it became the supplier of the Court. After the recognition at the Court a word "Royal" was added to its name. The current Court keeps the tradition and continues to use the tea utensils by Royal Albert, it's a recognized symbol of elegance, refinement, nobility, noble persons.

For many centuries the dishes are decorated with images of a Victorian rose, which is considered to be the national flower of England and reflects the elegance of the traditional English garden. Classic roses on dinnerware — yellow, pink, red, are characteristic only of the Royal Albert brand.

The blue regency of Edward VII in the 1900s was characterized by floral motifs, the richness of cobalt and gold ornaments. The reign of George V in the 1910s, World War added black color to the flower motifs. Spring flowers have raged on a light cream background since 1920.

When George VI came, lonely roses appeared on a turquoise or green background, "dots" and "polka dots" came into fashion. Churchill and World War I brought a gingham pattern with forget-me-nots and roses. During the reign of Elizabeth II and the revival of the empire, the ornament became bright and bold.

Beatlemania of the 60's added to porcelain a cream and pink background and golden roses. In the 70s there were very striking bright poppies in combinations of yellow, orange, coral colors. After the marriage of Prince Charles and Lady Diana porcelain bloomed with lush and vivid colors with rich gold decorations.

Currently, there are ten new tea collections, some of their characteristics are familiar to connoisseurs, others have a completely new look in conjunction with the traditional brand awareness.

To celebrate the company's centenary in 2014, a special vintage collection was released. It incorporates the maximum from all the masterpieces of the brand. Miranda Kerr expanded the range of floral motifs, by adding images of peonies, butterflies, she expanded the number of nuances of color. The dishes were enriched with gaming glamour, playfulness and expressiveness combined with floral romanticism. Porcelain has become a reflection of each era of the next king that is a unique global phenomenon.