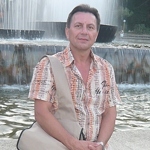 Картины Категория
Description
It happened! Space probe "Voyager-1" started the study of the planets of our Solar system in 1977, and left its borders and out into the interstellar space of the milky Way! On Board the spacecraft is a Golden record, indicating the location of the Land, as well as video and audio recording of the votes of the people in different languages, sounds of nature, animals and masterpieces of music. Amazingly strong the mankind project! It is possible that this first messenger of the Earth will ever be discovered and studied other intelligent galactic civilizations. After all, we are not alone, because there must be someone else ???...
The author's picture, executed in the technique of multilayer oil painting on canvas mounted on cardboard and covered with a protective varnish. Three-dimensional model of the Solar system is made based on the SD-disk, planet - metal and paper, painted with oil, acrylic with copper and gold. Will be a great decoration of the interior of the true lovers of the cosmos.
How to keep
remove dust with a dry cloth keep away from direct sunlight.
Доставка и оплата
Delivery on agreement
Local pickup (Moscow)
free
Postal Services (Russia)
$12.37
Условия и сроки доставки можно узнать у продавца до совершения покупки
Postal Services (European Union)
$32.99
Postal service worldwide delivery
$41.24
Условия и сроки доставки можно узнать у продавца до совершения покупки
Payment by agreement
Cash
Transfer to the seller's card
Electronic payment systems
Item categories