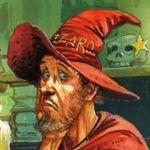 Actually, McGuffin in the form of a Puss in boots. When I was digging into the narrative of this fairy tale, before sewing it into the McGuffin, I found something interesting.

The plot of the fairy tale is much older. And the structure of the plot, in which a poor man with the help of an animal assistant marries the daughter of a king, vizier, khan, and even gets half the kingdom into the bargain, is found in different parts of the world among different peoples.
In fairy tales, helper animals, names of rulers, circumstances reflecting the way of life of society change. The owner of the castle, who is killed by an assistant, also changes. In more ancient versions, it is a troll or a snake found among the northern peoples.
But what is invariably a victory over a monster, followed by a long-awaited reward. Usually the fairy tale ends with "and they lived happily ever after". But in some versions (for example, English or Zanzibar), the ending is framed by another plot element, traditional for a fairy tale, - checking whether a person deserves the benefits received. It is important that the hero passes the test after he becomes rich. When the owner becomes a noble and bathes in luxury, the cat (fox or gazelle), which helped him to gain wealth, falls ill and dies (or pretends to be dead, as in the Italian, Austrian and Hungarian versions). The newly-made rich man shrugs off the news and says to throw away the remains of the animal. A close servant who knows about the "machinations", or the animal itself rises from the dead, reminds a person that he received all the benefits thanks to this animal, therefore it is necessary to show him due respect and honor him. The owner may be horrified and come to his senses, as it was in the English version, honor the assistant and continue to live happily, or recklessly dismiss the warning. Then all the riches, as in the Zanzibar version, will disappear and the person in a moment returns to the poor life he lived before.

I'm all for what - the narrative sewn into this McGuffin will help you in your main aspiration at the moment, whether it's to marry a prince or a princess, or maybe pass the Unified State Exam (it hasn't been canceled yet?), or get a good job, etc..
In general, you understand, the main thing is that the helper animal is always with you.

Oh, yes, it works only once, it will help you with your current aspiration, and that's it, then you yourself!