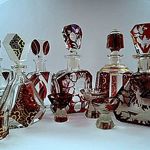 The sculpture produced at the factory Studio Skrdlovice, name Emanuel Beranek (Beranek E. 1899-1973gg). The author is the great designer of the 20th century Rene Roebicek (1922-2018). In the Czech Republic and the world it is called the "Glass Legend". He created a whole series of glass plastics called "Coral"

The name E. Beranek is one of the most honorable places in the world in the production of free-blown glass.

In 1940 during the occupation of Czechoslovakia by the Germans, at his home in Skrdlovice, E. Beranek and his three brothers opened a small factory Studio for the production of blown artistic glass. Difficult time, lack of equipment didn't stop Beranek hard to experiment with glass. Already during the German occupation, his glass was exported to Greece, Denmark and Switzerland. And of course were supplied in Berlin. E. Beranek did not engage in any contacts with the Nazis, he was just a designer glass. It was at this time he invented the technology bubble of glass and a special method of manual shape glass on the glassblowing pipe (Pontius), resembling ground glass. Working on an open oven at low temperatures (lack of fuel) E. Beranek invented the so-called "satin" glass. He made an incredible breakthrough in free-blown technique, at the present day, modern designers are working on technologies Beranek.

In 1947 the factory was nationalized and E. Beranek of the owner of the factory moved to their own offspring, as a simple steklodom. The unstable economic situation after the war, brought the factory to the brink of bankruptcy and threats of closure. In 1952, the cultural community of Czechoslovakia protested to the government against the closure of the factory and achieved the opening of a "Folk Art Center" on the basis of the factory, specializing in manual glass processing. In the centre at different times worked for the famous worldwide designers on the glass as the Head of P. (P. Hlava), F. Wiesner (Frantisek Vizner), Rene Roubicek (Rene Roubicek), Peter Mountain(Petr Hora), I. Freedom(Jaroslav Svoboda), Jan Beranek (Beranek Jan), Jaroslav Beranek ( Jaroslav Beranek) and many others.

In recent years, the prices for articles of glass Skrdlovice factory grew up and continue to grow.