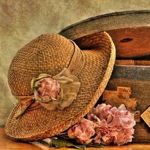 Предметы интерьера винтажные Категория
Description
Fantastically beautiful linen tablecloth from those that the masters from the Volga shores learned to embroider from an early age. It was as if fairy-tale snowflakes landed on the table, but did not melt, but joined in a round dance. And it turned out to be a holiday.

Nizhny Novgorod guipure is a special type of stitch embroidery that fills a pattern with a grid of fabric threads. In its current form, it has existed since the end of the 19th century, in Soviet times it was called "Gorky" after the renaming of Nizhny Novgorod. The fishery still exists today.