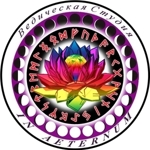 Оберег Категория
Description
Amulet Helm of Terror, carved on a galtel of black transparent obsidian on a cord with a braided lock (to adjust the desired length). Engraving and drawing.

Helm of awe is of Scandinavian charm. It's called the aegishjalmur, also called. Another name for this amulet is the cross of invincibility. It is believed that this is one of the most powerful and effective amulet that has magical powers. The Vikings and shamans firmly believed in his limitless power.
Helm of awe talisman has more than one meaning. One of them is the fact that the amulet gives protection from enemies and helps them to win. It is believed that this amulet makes a person virtually invulnerable. Another meaning is that the talisman increases the magical force. That's why he was so revered and valued by shamans. In addition, a's called the aegishjalmur or helm of awe is the value more relevant to modern society – it increases vitality and energy. Due to this, a person becomes stronger and can perform the toughest jobs while remaining cheerful and full of energy. The following value of the amulet – it improves memory and attentiveness. This means that it can be worn by pupils and students. The helmet of horror is an amulet that protects from evil, helps to repel witchcraft and negative energy attacks. He is able to transform negative energy into positive, and to give to its owner. In addition, the amulet helps you find your way in life and to find harmony with others. The helmet of horror attracts wealth and good fortune. In addition, the amulet helps to find your soulmate and build a strong family.

Obsidian is first and foremost a strong protector from negative energy.
Black obsidian is a powerful tool for cleaning the aura from energy dirt. It is a stone-defender. Able to protect the human aura from the introduction of various alien vibration, energy vampires, negative programs.
And obsidian is working and to troubleshoot already existing in the aura of energy damage, and to be protected from those influences that can take place in the future.
He has a protective nature magic. This talisman will protect its master from the machinations of evil forces and any negative information.
In addition, obsidian is a traditional stone of the magicians, astrologers, mystics and psychics it helps to develop foresight, gives power over the unseen, reveals to his master the secret essence of things.
Magical properties of obsidian occur due to the special own power of this mineral, and also due to its ability to accumulate and strengthen its power and energy of his master. Promoting "materialism", man, black stone eliminates disharmony in the soul. Helps to work on yourself, get rid of obsessive thoughts, fears, complexes.
Concentrating astral forces, obsidian energizes and strengthens the energy of his master, helps him to see his own shortcomings, leading thoughts in order.
How to keep
Read our tips to care for handmade goods: www.livemaster.ru/topic/1752793-rekomendatsii-po-uhodu-za-izdeliyami-ruchnoj-raboty?vr=1
Доставка и оплата
Delivery on agreement
Postal Services (Russia)
$5.21
Условия и сроки доставки можно узнать у продавца до совершения покупки
Postal service worldwide delivery
$12.09
Условия и сроки доставки можно узнать у продавца до совершения покупки
Free shipping
При покупке на сумму от $74.39
Payment by agreement
Bank transfer
Savings Account in PAO
Transfer to the seller's card
Map Savings Bank PJSC
Electronic payment systems
Yandex-Money, Qiwi-purse, Paypal
Money transfer system
Western Union Contact Gold Crown Unistream
Other methods
COD is not working !!!
Item categories