Panels: Jarl-the leader of the Vikings 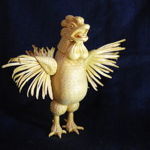