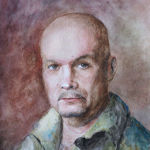 Картины Категория
Description
Aniva Lighthouse-an abandoned lighthouse on Cape Aniva of Sakhalin Island, on the rock of Sivuchya. The height of the tower is 31 meters, the height of the light is 40 meters above sea level. The range of the lighthouse was 28 km (17 miles).
The Aniva Lighthouse was established in 1939. The author of the project was a Japanese engineer Shinobu Miura.
The lighthouse is a round concrete tower with a small side extension embedded in an oval base. The tower has 9 floors. On the ground floor there was a diesel and battery room. The first floor with an extension was occupied by a kitchen and a food warehouse, the second-a radio room, a control room and a watch room. On the third, fourth and fifth floors there were living rooms designed for 12 people. In the central part of the tower there was a pipe, inside of which was suspended a pendulum-a weight of 270 kg, wound every three hours for the movement of the optical system. There was life in the lighthouse. Now he lives on old memories.
Since 1990, there are no more permanent employees at the lighthouse. It was converted to nuclear power and operated autonomously until 2006. The lighthouse is currently abandoned. Occasionally, small groups of tourists come to visit the old soldier, who for many years illuminated the path of passing ships.
Unfortunately the lighthouse is gradually destroyed by the action of water and wind.
Доставка и оплата
Delivery on agreement
Local pickup (Moscow)
free
Postal service (Russia)
by agreement
Условия и сроки доставки можно узнать у продавца до совершения покупки
Postal service worldwide delivery
by agreement
Условия и сроки доставки можно узнать у продавца до совершения покупки
Payment by agreement
Cash
Transfer to the seller's card
Item categories