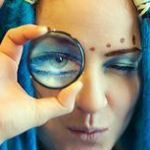 Подвеска Категория
Description
Pendant made of opalite, rock crystal and hand-poured in the shape of half-moons tin.

The symbol of the three-faced moon reveals to us three periods in the life of a woman: a girl, a mother and an old woman, which reflect the three phases of the moon respectively: growing, full and decreasing.

As for the moon, and in the woman is hidden the same power/ mystery. Each woman can identify herself with the Goddess by the example of the analogy of the transformations of her body and the face of the moon.

The period of the growing moon represents a young virgin girl who is growing rapidly and Matures every day. It corresponds to the Goddess of hunting, for example, Roman Diana/ ancient Greek Artemis.

Flooding the night sky with its light, the full Moon is symbolic of the mother Goddess and her uterus, swollen with new life. This is the period of life of a Mature woman capable of childbirth. It corresponds to the Goddess of fertility, for example, Roman Ceres, Juno/ Greek Demeter.

The period of the waning moon in a woman's life is characterized by old age, when her menstrual cycle ends. She becomes a wise old woman. As the Moon in the sky decreases, her body shrinks, the energy goes away and, in the end, it disappears. After her death, she again returns to earth and is born into a new flesh, passes through all the stages again. It corresponds to the Goddess of night and witchcraft, for example, Roman Trivia / ancient Greek Hecate.

For each product there is a service - gift packaging to kraftova envelope, wrapped with natural twine and sealed with wax.
or a quick sketch with black pen(as shown in the picture).the theme is determined by me and the mood)
When you select a package with no explanation about the outline - is seal..
The link below can see looks like gift wrap.

And just try not to drop.

Jewelry should not be stored in humid rooms like the bathroom, showering or personal aquarium ))

The metal can oxidize.

But jewelry can be washed,IMPORTANT, later, to wipe them dry with a towel.

I cover all jewelry patina (a chemical solution, dyeing was originally a silver color metal black/copper),later additionally apply a layer of antioxidant.

But over time, the layer of patina can wear off a little,it makes the jewellery more beautiful,the effect is similar to the "blackened silver".

That's all please enjoy)
If you have any questions,feel free to ask.
Доставка и оплата
Delivery on agreement
Local pickup (St. Petersburg)
free
Postal Services (Russia)
$4.72
Условия и сроки доставки можно узнать у продавца до совершения покупки
Postal service worldwide delivery
$9.44
Условия и сроки доставки можно узнать у продавца до совершения покупки
Payment by agreement
Cash
Bank transfer
Transfer to the seller's card
Electronic payment systems
Mobile phone top up
Other methods
paypal.me/ofelway
Return and exchange terms
I send items by Russian Post unless otherwise directed. I send as soon as I can, usually in one to four days. I do shows and am out of the shop quite a bit.
When I list an item, it is made and ready to sell. If it is sold before you order I will let you know and you have the choice of giving me the time to make another or to refund your money if you don't want to wait.

Thanks for looking [;D I will be glad to answer all your questions!
Item categories