THE WOLF OF VEGVISIR 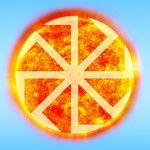 Wolf will endow its owner with the ability to achieve their goals. Despite the teamwork, the predator has always remained a strong personality. Without violating the established rules, he is constantly looking for the opportunity to take a leadership position. Pendant Wolf will help to defend independence, to achieve recognition of their rightness. The person who wears it is confident and thoughtfully makes efforts to achieve their goals.