The deliverer from troubles.Icon Of The Mother Of God 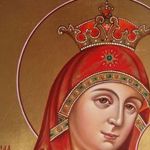 Иконы Категория
Description
Deliverer from troubles-this is the name of the icon received by the people for the fact that it was famous for many miracles from ancient times. As early as 1841, the inhabitants of Sparta (Greece) got rid of locusts by praying before this icon.
Until 1889, the icon was located on mount Athos, in the Holy Panteleimon monastery .
From the Panteleimon monastery, according to the will of the schiarchimandrite Makarii, this icon was transferred to the new Athos monastery. When the first celebration in honor of this icon was held in the Simone-Kananite monastery, a storm washed up more than a ton of fish on the shore of the monastery.
The celebration of the icon "Deliverer" was established on October 17 in memory of the miraculous rescue of Emperor Alexander III and his entire family during the railway crash at Borki station Less than a month before this incident, on September 24, 1888, the entire family of the Emperor visited the new Athos monastery, where Alexander III personally laid the Cathedral in the name of the Holy great Martyr and healer Panteleimon.
There are many stories about the icon's miracle. One tells about how the boy Anastasia fell ill with a serious and incurable disease. But despite all the efforts and struggle of his parents with the disease, the boy was getting worse. Seeing that nothing helps the child, the parents asked the priest to give the baby communion. But the priest did not have time to see the patient, and the boy died.
On the way to the sick man the priest invited the Martian to accompany him. He brought with him the icon of the Deliverer. The priest, not giving himself peace that he was late for the child, began to pray with Martinian to the mother of God and ask her to help raise the child. During the time of prayer the icon was on the body of Anastasia. After the prayer was over, the elder christened the child's face three times as an icon - the baby came to life.From these brief miracles that I have described here, you can understand where it got its name.
What do they pray for in front of this icon ?
From getting rid of any addiction,
From getting rid of the torment brought by the disease,
About help in times of trouble,
About getting rid of spiritual sadness and of course in all everyday needs and sorrows.The icon of the Deliverer can be given to close people on any significant date,it is good to bless children with it for marriage - after all, a daughter parting with her parents creates her own family and now she will pray to the mother of God as a mother and tell her sorrows.
The icon is written in the academic style of writing, on a lime Board with back keys. Egg tempera, gilding with gold leaf .As always I perform icons according to ancient technology in the Canon of the Orthodox Church. A Board with a beautiful straight ark. A perfect gift for christening, wedding, wedding and for any occasion.
How to keep
Respect to the Shrine! Keep away from moisture and drafts .Wipe only with a dry cloth or a fluffy brush.To protect it from temperature changes and other external influences put it in the kiosk it will be the best for the icon.
Доставка и оплата
Delivery on agreement
Local pickup (St. Petersburg)
free
Courier (St. Petersburg)
Подробности о доставке курьером уточните у продавца перед совершением покупки
Courier inside the ring road (St. Petersburg)
Подробности о доставке курьером уточните у продавца перед совершением покупки
Postal service (St. Petersburg)
Условия и сроки доставки можно узнать у продавца до совершения покупки
Postal service (Russia)
Условия и сроки доставки можно узнать у продавца до совершения покупки
Postal service worldwide delivery
Условия и сроки доставки можно узнать у продавца до совершения покупки
Payment by agreement
Cash
Bank transfer
Transfer to the seller's card
Money transfer system
Other methods
Item categories