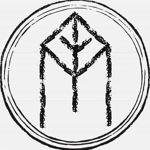 Ремни Категория
Description
For the Vikings Valhalla was a place that wanted to get every soldier. The souls of the fallen valiantly in battle, picked up the Valkyries, and half of these souls went to Valhalla to Odin (the second half was heading in Folkvangr to Freya). Trapped in Valhalla, the Vikings became the einherjar, Odin's personal guard, the army of Asgard, which will oppose the giants in the hour of Ragnarok. The warriors of Valhalla lead lives worthy of real Vikings. Every morning they dressed in armor and go to fight with each other. For Breakfast, their wounds healed, and the dead rise again. Then the heroes of Valhalla sit at a large table and begin to feast. They drink the honey, which gives the goat Heidrun. Heidrun lives in Valhalla, fed on the leaves of Yggdrasil. And eating the warriors of the boar Shriner, who every day prepares Andhrimnir, and every morning the boar comes to life again. At night Angeli go Valhalla, and they come beautiful maiden (not Valkyries!), that pleasuring them until the morning. However, in the Valhalla you can get otherwise. If a soldier was brave, skilful and successful, he could not die in battle before they reach old age. Then he committed ritual suicide – hung on the oak tree, repeating the act of sacrifice of Odin. The third option – the execution of "blood eagle". If the accused dishonour the warrior endured the punishment without making a single sound, he also could count on Valhalla.