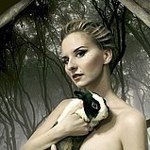 Подвеска from House Of The Moon Dew Категория и бренд

Подвеска Категория
Description
Bast or Bastet — Ancient Egyptian goddess of joy, fun and love, feminine beauty, fertility and the hearth, which was depicted as a cat or a woman with a cat's head.
Although the cult of the cats have already had important religious significance at the dawn of the New Kingdom, it was developed after the Pharaoh of Libyan origin Shoshenq built the city of Bubastis on (tel Basta in Arabic), the main place of worship of the goddess Bastet, located in the East of the Nile Delta, to the status of the capital. Bast has become very popular and revered among the population. Now, however, she became a symbol of fertility, motherhood, charm and favor sun — like Sekhmet, she was to be called eye of RA. Thanks to the cult of the cats, brings together thousands of worshipers and pilgrims every year on the streets of Pibeseth arrived a huge number of people. Herodotus reports that "«700 000 people of both sexes, except for children", annually visited the center of worship of bast. The name "Bubastis on" became another name of bast.

The decoration is made in the technique of miniature sculpture, using stones - eye of Shiva.

Подвеска from House Of The Moon Dew Категория и бренд