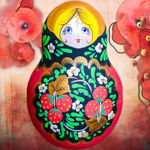 Матрешки Категория
Description
The most famous souvenir in Russia, certainly, is a Russian folk doll made of wood. This doll, of course, Matryoshka. It's out in all parts of the world, and everywhere greeted with undisguised delight.

The name matryoshka has come it is no coincidence that the time of appearance of the first Russian folk toys name Matrona, Holy cow was one of the most common. The root name is a Latin word meaning mother. This name has always been associated with the mother of a large family, possessed of good health and the people's figure. Subsequently, it became a household name and started to mean the people's wooden toy.