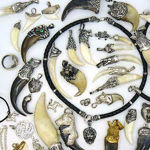 Подвеска Категория
Description
Pendant-amulet "Fang of the Wolf" in a silver decorative finial. Finial - decorative, made in the technique of blackening, polishing. Pendant amulet Fang of the wolf (the real) is suspended on a leather cord with a length of 45-50 cm Pommel is made of silver in a UNISEX style, is a great talisman for men, women and child. The weight of silver 9,5 gr. True Fang of the wolf without chemicals, taxidermic treatment of tooth, Fang.
The photos show the second version of the model in bronze with gold price 2300 rubles. Is possible accurately such option in silver with gilding the price 3000 RUB.

The wolf at all times been revered and iconic animals the Nations where he dwelt. And not surprising, because the image of the wolf is associated with the cult of the warrior, the hunter and the leader of the troops. The wolf was revered among the Slavic and Scandinavian tribes, Khakas, Enets, Komi, Bashkirs, Ugrians, Mongols, Chinese and other nationalities. It was believed that the Fang of a wolf scare away the evil spirits, evil spirits. Fang of the wolf was the equivalent of fangs and claws of a bear. Especially, carefully guarded children from evil eye and diseases. Above the cradles and beds, clothes the children should be suspended from the tooth of a wolf. The Slavs in ancient times wore the tooth of a wolf on a chain or on a cord as a necklace. Pendant -amulet-the amulet "Fang of the Wolf" is an amulet or talisman and was currently popular and loved among people. In the film "three Hundred Spartans" king Leonidas with an amulet on the neck - the fangs of the wolf. Symbolizes the lead over fear, courage and talisman, protection from death.

The main purpose of the pendant-amulet talisman "Fang of the wolf":