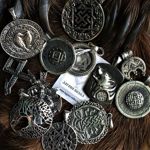 Народные украшения Категория
Description
Lunnitsa Slavic, female amulet, which belonged to the night luminary (moon-feminine). The cult of the moon was associated with the cult of fertility.The term fertility applied not only to fertile fields and meadows, as many might think, but to women.Mother earth had always been associated with a woman,and a woman was as Holy in childbirth as earth.Lunnitsa not only helps women, girls in their women's Affairs, but also is a powerful talisman against evil spirits, curses, evil eye, guardian of health, protects from night spirits that are activated by the light of the moon, allows you to increase your attractiveness in the eyes of men. Lunnitsy were worn and worn as necklaces, as pendants were attached to the belt, were an integral part of some hats.Often, lunico present an image in the form of oblique lines – fertile rain is poured out on the earth. Sometimes on the crescents you can find a whole vault of heaven-the sun in the middle, rain in the form of oblique dotted lines, stars, earth. In our time, when the Slavic traditions are revived, pendants lunnitsy are no less popular amulet for girls who are happy to use them as in the good old days!
How to keep
to protect
Доставка и оплата
Delivery on agreement
Postal Services (Russia)
$7.84
Условия и сроки доставки можно узнать у продавца до совершения покупки
Postal service worldwide delivery
$12.54
Условия и сроки доставки можно узнать у продавца до совершения покупки
Free shipping
При покупке на сумму от $22.64
Payment by agreement
Transfer to the seller's card
Cash on delivery
Item categories