''Sorrow Pages'' by Gennady Dobrov, or Back Side of Victory 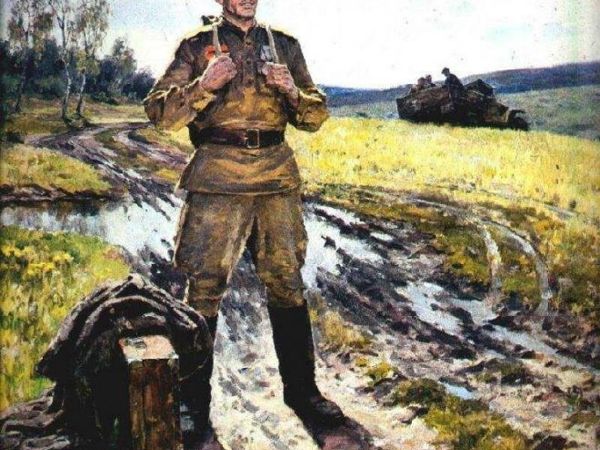 The back side of Victory! or
What kind of people are we?..
Victory is what everyone is waiting for... victories in sports, personal victories, victories in competitions, trials, military operations...
Ozhegov in his dictionary defines victory as "a success in a battle, war with completely defeated enemy."
What could be more beautiful than to Win, to Return as a winner? Can a winner grieve? How do people meet a Winner?

V. Puzyrkov "Peace is Ahead"
By June 22, the day of memory and sorrow, looking through paintings dedicated to 1941, I came across portraits of soldiers and veterans, created by people's artist, journalist and member of the Russian Academy of Arts, Gennady Dobrov.
These portraits were interesting, so I began to look for information about the artist who created them. I found out that in 1974, studying at the Surikov Institute, Gennady learnt about Valaam residential care home, where disabled heroes of war lived.

From the artist's letters to his wife, I read that being there, he did not only draw those people, but also helped them: fed, washed in the bath, transported, listened to, and looked after. Thus was created "War Autographs", the first series of the graphic cycle "Sorrow Pages". Dobrov had been creating this series for six years, from 1974 to 1980, it includes portraits of disabled people from Valaam, Bakhchisarai, Omsk, Sakhalin, Armenia.
It seems to me that looking at these pictures is much more important than listening about the value of human life, about humanism... They are right before your eyes:

"Wounded, defending USSR". Alexander Podosenov at the age of 17 volunteered to go to the battle front. He became an officer. In Karelia, a bullet came through his head. He lived on the Valaam island after war, paralyzed, sitting motionless on the pillows.

"The Story about Medals. There was Hell"

"Partisan"
Victor Lukin from Moscow first fought as a guerilla, and after the expulsion of the fascist invaders from the USSR fought against them in the army.

"Defender of Nevskaya Dubrovka"
Former infantryman Alexander Ambarov defended the besieged Leningrad. During bombing had been buried alive twice. Not hoping to see him alive, comrades dug up the warrior, and what a miracle, he healed to go the battle front again.

"War Soldier"
Michael Guselnikov from Omsk, soldier from 712th infantry brigade. He fought at the Leningrad front. January 28, 1943 during the Siege of Leningrad, the soldier was wounded in spine and since then bedridden.

"Came from Caucasus to Budapest"
Marine guardsman Alexei Chkheidze comes from Danki village near Moscow. In winter of 1945, while storming the Royal Palace in Budapest to save the monument, he was heavily wounded because of the explosion, miraculously survived, endured several surgeries. With amputated hands, blind, almost completely deaf, he finds strength to make jokes and ironically calls himself a "man–prosthesis."

"Front Memories"
Boris Mileev from Moscow lost his hands during the war, but did not accept the fate of a disabled person, he learned how to type. When the artist wrote the veteran, he printed front-line memories.

"Old Injury"
Soldier Andrei Fomin comes from the far eastern city of Yuzhno-Sakhalinsk. In one fierce battle he was seriously wounded.
"I was brought reproductions of works by Gennady Dobrov... I literally got sick, I didn't sleep all night... I'd send these reproductions around the world..." (Chingiz Aitmatov)
Do you believe that war heroes who became disabled were sent away from cities by secret order? Expulsion dates back to 1948 – 1950. It is confirmed by many sources. From Leningrad, the Winners were sent to Valaam and Goritsy residential care homes, on the banks of the Sheksna River to the Kirillo–Belozersky monastery. At first, they wanted to build houses for disabled, but the country was in ruins, there was no money, so they decided to open these institutions in closed and abandoned monasteries and temples. People tell that disabled people were afraid to appear on the street without an accompanying person, lonely disabled people were sent to such homes against their will, if they tried to escape, they were caught and sent there again. I got this information for the first time from a story written by Eduard Kochergin (the main artist from Bolshoi Drama Theatre), "Vasiliy Petrogradsky and Goretsky" (the book "Angelova Doll").

"After a short time, the mass expulsion of military disables people began. They were moved to specially created homes in the former monasteries far beyond St. Petersburg. "Why?" You may ask. It turns out that the USSR, in general, denied the existence of disabled people. It was believed that country-winner could not have such people. They were really hidden in homes for disabled people and boarding schools, and doctors were given order to persuade parents to leave their disabled children in maternity hospitals if the child was born with disturbances. You can read about it in "Black on White" by Ruben Gallego.

This is for our happiness, in order to protect us, healthy people, from meeting disabled people not to maim our souls from what we see, to protect our nervous systems.

To sum up, we won not only in the Great Patriotic War, but also disability, having eradicated this subject from people`s consciousness!